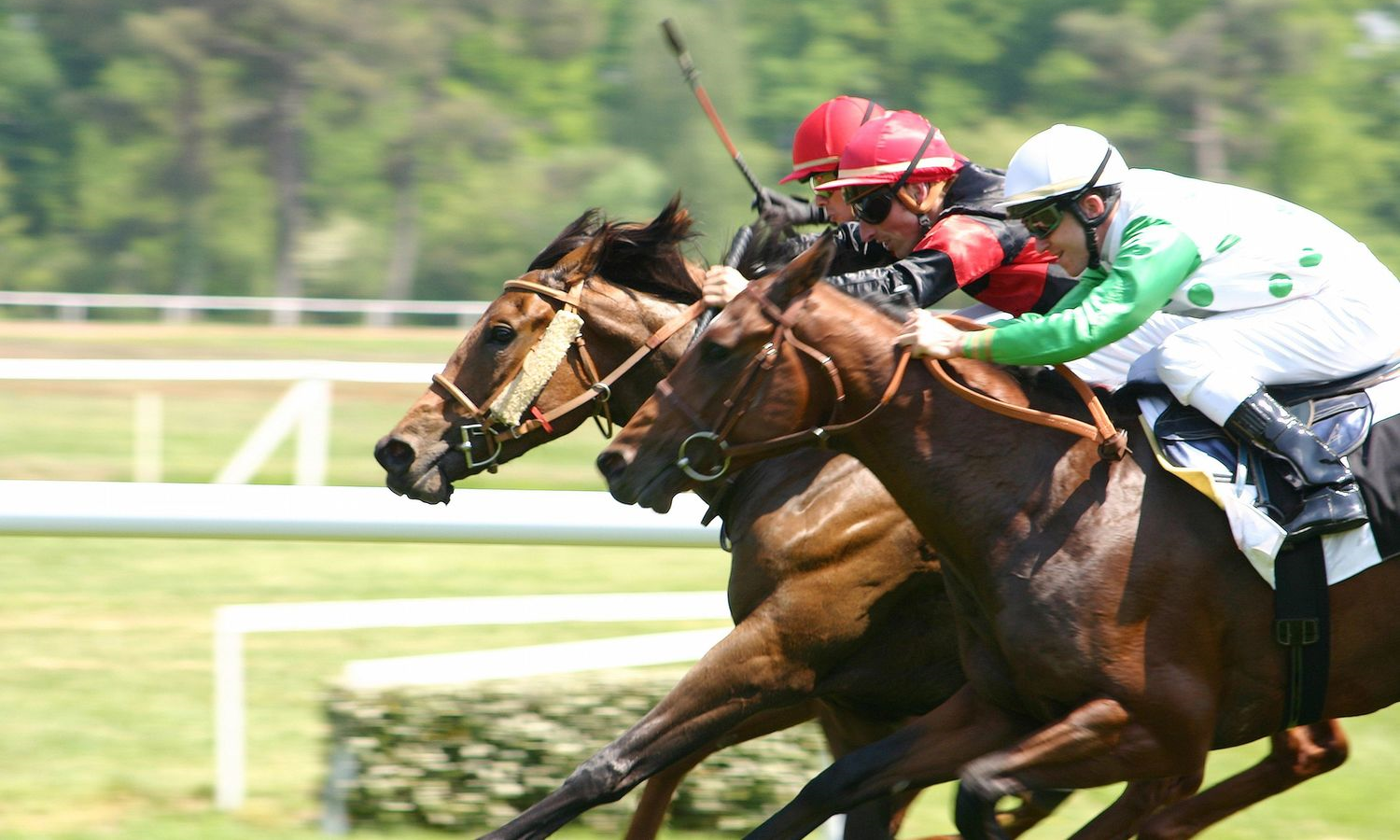 This week’s edition of BABYTALK finds the Derby Trail really hitting its stride. Preps were run in Louisiana & Arkansas this past weekend, and most of the tracks have now had their first 2015 prep.  This weekend we have the first Florida Derby prep with the Holy Bull contenders: Upstart and Frosted head a 10 horse field. This column continues to focus on individual horses as they start to enter the prep races where they can earn more than 10 points.

I. Stakes Recap    There were 3 major 3-year-old stakes races over the Martin Luther King weekend.

This 1 mile and 70 yards (8.32 furlongs) stakes race run on dirt for a purse of $125,000 is for 3-year-old fillies at the Fairgrounds Race Course in New Orleans. I’m a Chatterbox, in her first venue for new trainer Larry Jones, lead this field from starting gate to final wire, showing no signs of slowing down.   What really caught my eye in the paddock was her arched neck (see discussion item III this week). When I saw her arched neck, I altered my ticket and singled this horse on my trifecta ticket. Favored Top Decile ran a respectable race, considering that she was compromised by an outside post position as well as a “bad trip”. West Coast Belle showed that the lack of her morning work outs did not affect her fitness as she closed to run 4th. Horses that caught my eye:

I’m a Chatterbox won the race in gate-to-wire fashion. I do not know whether due to lack of pace (respectable fractions which allowed the horse to have plenty of energy to finish the race strong) or the first race with new trainer Larry Jones. Recent “bullet work outs“ (the best workout of the day) gave a hint of the improvement.

POSITIVES for I’m a Chatterbox:

NEGATIVES for I’m A Chatterbox:

Top Decile had to overcome an outside post position in the SILVERBULLETDAY. Only 4% of horses win the race when they draw outside of post 8 and have to race 1 mile 70 yards at Fairgrounds. This is due to the short distance to the first turn and the outside horses having to run a wide trip around the first turn. Still, on paper, the most accomplished 3-year-old filly, and this race, did little to hurt that reputation.

Forever Unbridled  made the big jump in class from lower level maiden races to stakes company in style, coming in 2nd in SILVERBULLETDAY. Continued improvement is expected from the connections. Should be a player among the tough Fairground 3-year-old class competition.

LECOMPTE is a Grade 3 1-mile, 70 yard Grade III stakes race for 3-year-old colts on their way to Churchill Downs held at the Fairgrounds Race Course in New Orleans.  The purse is $200,000. Interesting race: “the pace”—horses keeping pace with the lead horse– fell apart allowing International Star to close in the stretch to secure the win. I was not very impressed with field in this race as a whole. I doubt that International Star prefers dirt given his past performances (Grade 2 win on turf, and a Grade 3 win on polytrack). Owner Ramsey will enter International Star in the Derby if he can get the spot. Ramsey feels every horse he has in the infamous Derby competition is one less horse he has to beat. He has run some horses that were poly track specialists on the dirt in the Kentucky Derby just to keep other competitors who might have a better chance to win from participating. These competitors did not have as many Kentucky Derby points as a Ramsey horse, but might have been better suited for the Kentucky Derby given its dirt surface and 10 furlong distance.  Horses that caught my eye:

Tiznow RJ  did not have the best trip at the LECOMPTE. This horse likes to run on the front end and “traffic” did not allow him to set the pace Saturday. Will watch his next race and see how he matures as the races get farther in distance.

Savoy Stomp  While this Pletcher-trained horse did not hit the board, he impressed me most of all. Traffic problems the first half mile eliminated his chance of winning. However, instead of quitting, he sped up, starting a run as he passed many horses in the Fairgrounds stretch. Already the Pletcher also-ran (shown by his trip from Florida to New Orleans), he will need to improve to be in the mix for the Kentucky Derby.

SMARTY JONES  was the first of four races for the 3-year-old boys at Oaklawn in Hot Springs, Arkansas. It is 1-mile (8 furlongs) in distance, run on dirt for a purse of $150,000.

Mr. Z  appeared to have this race wrapped up as they turned for home. However, he veered right and went out in the middle of the racetrack, allowing Far Right to sneak through on the rail and win.   Horses that caught my eye:

Mr. Z  has the most accomplished resume as he ran in his 7th Graded Stakes Race in a row. He actually had the race won until he veered toward the stands.  I do not know why this happened (several theories), but “the barn”—owner, trainer, jockey and handlers– needs to figure it out.

Far Right won the SMARTY JONES Monday, finally putting it all together after only winning one race in 6 prior starts. It should be noted, “traffic trouble” has plagued Far Right in the past, so this win is a good sign he can handle the traffic.

II. Pletcher major contenders   As usual, Todd Pletcher’s barn has many Kentucky Derby contenders at this point in time. This week I will choose what I believe are his top 3. Because 2 of these 3 had their first workout of 2015 this past weekend, I will focus in on them.

III. Keep an eye on horse’s physical appearance in the paddock looking for hints of performance

I have touched on this in prior columns. However, given last weekend I want to expand on this as I changed tickets (bets) in both of the weekend Derby preps based on things that I saw on horses: profuse sweating and physical appearance in the paddock.

The first thing that a handicapper should do is make note of the outside temperature at each racetrack they are wagering on that particular day. The temperature Monday in Hot Springs, Arkansas was in the 50’s. Most of the people at the races were wearing coats of medium bulk. When I watched the horses being saddled for the SMARTY JONES prep, I noticed the favorite, Mr. Z was sweating profusely on his shoulders and chest. On a cool day, this is a sure sign of some stress or discomfort.

While the horses did saddle outside in view of the fans instead of the usual Oaklawn underground paddock, I decided to take this horse off the win line of my trifecta ticket.  Mr.Z had the lead as the field turned for home, and it appeared that he would win the race easily. Then, he suddenly veered toward the outer rail.  While it is too early to determine if this was due to a physical problem, I used the excess sweating as a clue and turned a losing wager in to a winning wager.

A sure tell tale sign that a horse is ready for a big performance is an arched neck. This is not discussed much in equine circle, as it is so rarely seen in horses.

While watching the Fairgrounds television feed Saturday afternoon, I saw I’m a Chatterbox display one of the most profound arched necks I have ever seen. I looked at the tote board and her odds were 19 to 1. I singled her on the win line of my trifecta ticket. She won at odds of 8 to 1.

My only mistake was not wagering win bet on her, because I did not have the 2nd place finisher, I did not cash my trifecta ticket.

The above clues can help those who enjoy wagering on equines. Profuse sweating and arched necks in the pre-race paddock are not related to a horse’s bloodlines or training and are not something you can identify by reviewing the Racing Form. However, identifying these predictive signs of a horse’s performance can help you parlay this information into cashing that big ticket.

IV. Prep Importance  With each week that passes, we get closer to Derby weekend. Keep in mind, the prep races not only get longer in distance, but the competition gets tougher and the pressure increases as each horse needs to earn Derby points that will get them in the field.

While past performances are important, I give an intangible this time of year to barns that are experienced at historically performing well in Derby preps.