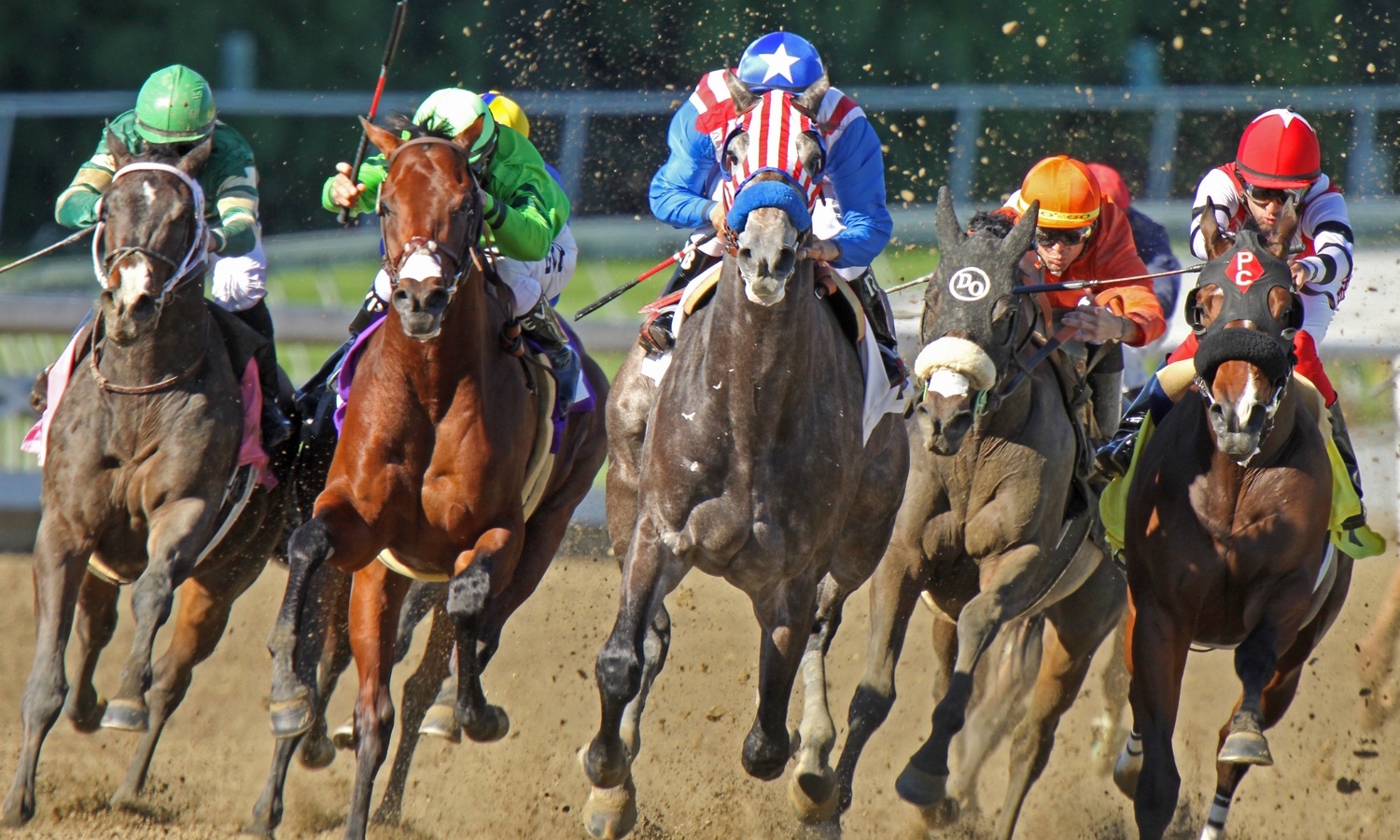 This week’s column is being written as we near the end of the first round of Derby prep races. Two minor preps will be held next weekend. While these races are nice to win, the 10 points they give the winner is not enough to guaranty a spot in the starting gate. The stakes are rising and winning a prep race from now on will get you enough points to qualify for the Kentucky Derby. After next weekend, the winners of each prep race will get a minimum of 50 points. Look for the fields to get more competitive, the race distances to get longer, and for clues as to which horses are serious contenders for the KENTUCKY DERBY.

The WITHERS is the second New York state 3-year-old prep. While most of the good New York horses are wintering in southern climates, there still could be a few runners here.  Many handicappers handed this race to El Kabeir, based on his past two wins in the JEROME STAKES (1 mile 70 yards run on dirt since 1866 at Aqueduct Racetrack, Queens, NY for $200K), as well as the KENTUCKY JOCKEY CLUB STAKES, which is a November-slated, dirt-surfaced race for 2-year-olds at Churchill Downs in Louisville, Kentucky.

While El Kabeir did take the lead at the top of the stretch – and looked like a sure winner – a Pletcher horse got the best of him. Far From Over shipped up from Florida for his second start, surely lived up to his name. Far From Over overcame his faltered start, in which he fell to his knees in the WITHERS. He “spotted the field” 14 to -17 lengths (meaning that’s how much distance he gave up with his stumble) to make a furious stretch run and pass El Kabeir as the horses neared the finish line.

Horses that caught my eye:

Far From Over – The first time I saw this horse run he only had one other start (late December Maiden race at Aqueduct) and had been training in Florida. He showed a tremendous amount of poise to not panic when he found himself so far behind the other runners.

POSITIVES for Far From Over:

NEGATIVES for Far From Over:

El Kabeir  “rated” well and made one run at the top of the stretch. But, he was unable to hold off or find another gear in order to defeat a fast closing horse.

ROBERT LEWIS STAKES was a highly anticipated California prep race because it was the 2015 debut of highly regarded Dortmund. Because it was a very small field of only 5 horses, it will be difficult to transfer this race to know how the horses would react in a full field—the kind that will be seen in future KENTUCKY DERBY prep races, as well as the DERBY itself. Dortmund had the lead, but gave it up as the horses turned for home. He rallied along the rail and defeated Firing Line in the final strides. Horses that caught my eye:

Dortmund –  I still do not see all the hype that surrounds this horse. He may have beaten a small field of horses, but does not put away horses that are of lower quality. The great part about this game is that we will not have to speculate, as the future DERBY prep races will answer all of the questions I have about this horse.

A couple of notable three year olds have dropped off the Kentucky Derby trail.

Leave the Light On

Winner of the REMSEM STAKES, a $400K Grade II, 11/8 mile (9-furlong) handicap competition for 2-year-old thoroughbreds ran on the dirt at Aqueduct in November. Due to an injury, he will be taken out of training, ending his chances of making the KENTUCKY DERBY field.

Winner of the HUTCHESON STAKES at Gulfstream Park, Florida, a 7-furlong $150K stakes race for 3-year-olds. Barbados has a leg injury and will be taken out of training.

The calendar shows that some important 3-year-old prep races will be held in the next few weeks.

The final two “10 point races” (named due to the 10 points the winner will receive) will be held next weekend Feb 14, 2015. Saturday will be the EL CAMINO REAL DERBY, 11/8 mile (9-furlong) romp at Golden Gate Fields in northern California on that racetrack’s Tapeta (non-dirt) surface for a purse of $200K. This prep has not produced any entrants in the KENTUCKY DERBY that I could find. I consider it unimportant on the “Derby Trail”.  On President’s Day, Oaklawn will host the SOUTHWEST STAKES (a $300K 8.5-furlong race on dirt since 1968 upgraded to Grade III in 2007). This is an important prep as many Derby horses have come out of the Arkansas Derby preps.

Beginning on February 21, the winners of Derby prep races will receive a minimum of 50 points. That day the FOUNTAIN OF YOUTH STAKES will be run at Gulfstream, another 11/16 mile dirt race run in late February since 1945 in Hallendale Beach, Florida. Purse this year is $400K.

The FOUNTAIN OF YOUTH STAKES race will be the 2015 debut of many of the Pletcher hopefuls (Carpe Diem and Daredevil to name a couple) as well as the return of other horses that have run in earlier races that were featured here – such as Frosted and Imperia from the Kieran McLaughlin barn, as well as a possible return of Upstart.

On the same afternoon, Fairgrounds Racecourse will present the RISEN STAR STAKES. Previously known as the LOUISIANNA DERBY since 1973, it was renamed in 1989 to honor locally-owned Risen Star, who had won the race in 1988. Risen Star went on that year to win two legs of the TRIPLE CROWN: the PREAKNESS and the BELMONT STAKES. Risen Star was voted 1988 Eclipse Award for American Champion Three-Year-Old Horse. The RISEN STAR is the second leg of the Louisiana prep races. It will be interesting to see which horses are shipped from Florida to New Orleans for this 11/16 mile dirt race which was upgraded from Grade II to Grade III in 2010 and offers a $400K purse.

This weekend both Bob Baffert and Todd Pletcher discussed with the media the schedule for some of each trainer’s leading DERBY contenders.

Dortmund won last Saturday’s ROBERT LEWIS STAKES and will train up to the April 4 SANTA ANITA DERBY, a 9-furlong Grade I competition on dirt run at Santa Anita Racetrack in California for a 2015 purse of $1 million. This will be a spacing of 8 weeks between races. He will then have 4 weeks until the KENTUCKY DERBY.

American Pharoah has not raced since Fall 2014. Baffert is targeting the March 14 REBEL STAKES (an annual March race of 11/16 miles on dirt at Oaklawn Racetrack, Hot Springs, Arkansas. This year’s purse: $600K).  While many would question why Baffert is shipping this horse across the country, remember Baffert ran Bodiemeister in the REBEL STAKES and has had good lucking shipping into Arkansas.

Carpe Diem trainer Todd Pletcher announced that he is targeting the TAMPA BAY DERBY, a Grade II event since 2011 run at Tampa Bay Downs on a 8.5-furlong dirt track. The 2015 purse is $350K. Carpe Diem has enough points to make the field and will allow the other Pletcher horses to run in the Gulfstream Racetrack prep races.

Daredevil is another Pletcher-trained competitor. Pletcher is targeting the SWALE STAKES at Gulfstream. The SWALE is 7-furlongs with a purse of $150K that will be run February 28, 2015. This dirt-surface race distance will allow Daredevil to build his endurance and make one more prep race before the KENTUCKY DERBY.

Itsaknockout will next run in the FOUNTAIN OF YOUTH at Gulfstream.

JS Bach will be shipped by Pletcher to Oaklawn to run either in the President’s Day SOUTHWEST STAKES, or the following Saturday to the RISEN STAR to held at the Fairgrounds. This horse is among the lowest regarded of Pletcher’s 3-year-olds, and is one horse that Pletcher will ship elsewhere to attempt to earn DERBY points.

Far From Over who impressively won the WITHERS STAKES will again race in New York at GOTHAM STAKES, which this year is an 8.5-furlong race at Aqueduct Racetrack. The distance has been variable since its inception in 1953—but always a mile or more—and the 2015 purse is $400K. While this horse trains in Florida, this is another that Pletcher opts to ship elsewhere to avoid competing with stablemates.