The BELMONT STAKES is now in the history books. What a performance put in by American Pharoah as he became the first Triple Crown winner since 1978! This is the last column of BABYTALK for the 2015 Triple Crown season. Look for us to return in October as we look at the up and coming 2-year-olds who may be 2016 contenders. 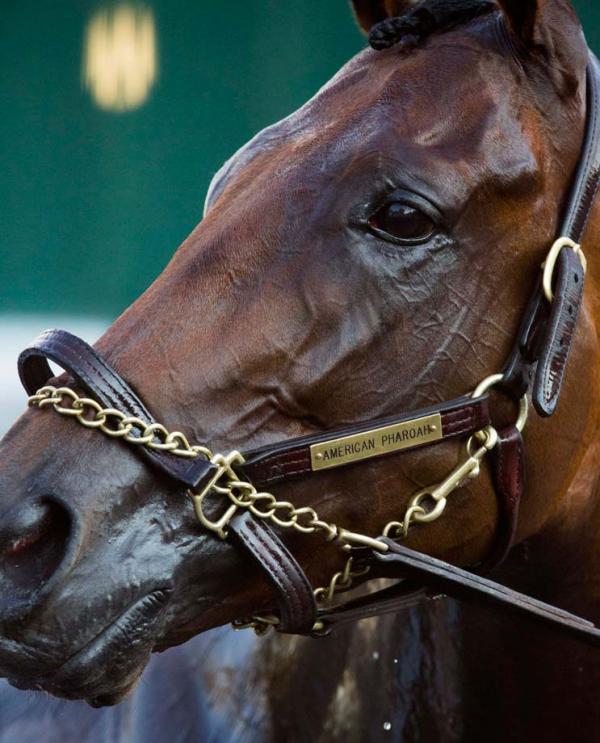 This column will be a wrap up of the season. This week’s Featured Three:

Churchill Downs got heavily criticized last year for the way it handled the Triple Crown. This year the racetrack built a new VIP area for the owners of the twenty contestants. Included were the horses’ racing colors painted on the roof of this VIP area that sits adjacent to the winner’s circle. I had the fortune of visiting this area the day before the BELMONT STAKES, because I was in Louisville for a conference. The colors from KENTUCKY DERBY 2015 of all the horses that had run for the roses were still atop the roof.

As a part of the STEPHEN FOSTER HANDICAP on June 13 (and after dark racing card) Churchill Downs honored American Pharoah and his connections. The Triple Crown winner was paraded past the stands adorned in a blanket bearing the symbols of all three Triple Crown races. After the walk in front of the grandstand, the horse was led into the paddock to his stall #18 where American Pharoah was saddled before he ran the KENTUCKY DERBY. Churchill Downs even put up the identifying sign bearing his name on the back stall wall. It is estimated that this ceremony increased attendance 5,000- 10,000 fans at that Saturday Night’s card.

As the fans crowded into the paddock area and snapped pictures of this impressive equine, I could not help but ask myself how many new fans this horse has brought to the sport over the last six weeks? Is it no wonder that the steed has his own Facebook page?  https://www.facebook.com/pages/American-Pharoah/704945992931540

I know the Churchill Downs was heavily criticized by California Chrome’s connections last year, but the track’s effort in upgrading their facilities and honoring the 12th Triple Crown winner has once again shown me why historic Churchill Downs remains the racetrack that the world sets its eyes on during the first week of May.

III.  WHAT HAPPENED TO ALL THE 3-YEAR-OLDS?

As I was cleaning out my desk before writing this column, I came across several articles written the weeks before the KENTUCKY DERBY which heavily lauded this group of 3-year-olds. I stopped to ask myself,  “what happened to this group?” Citations from the articles I reread today used phrases like:

When I watched a replay of the Triple Crown races, I am reminded that the KENTUCKY DERBY was run in a conveyor-belt-like fashion in which the top three horses had the lead and remained that way all the way around the track. Where were all these other great 3-yearolds? I remember the thunderstorm that turned Pimlico into a mud bog shortly before the running of the PREAKNESS, and understand why that race was so one-sided. American Pharoah took the field in gate-to-wire style on the front end in the BELMONT STAKES, with only modest challenges put forth by Mubtaahij and  Frosted. Once again, I wonder where the parity was among this group?

I asked myself a simple question: was this 3-year old crop overrated? Or is American Pharoah that good?

The answer will come soon enough when these 3-year-olds begin to face older horses as Summer turns into Fall. There is a relatively healthy and fast group of 4-year-olds awaiting this group of 3-year-old challengers. The true barometer will be how American Pharoah, Frosted, International Star (remember he missed the Triple Crown races) and the other 3-year-olds do when they face the older horses. I still think the BREEDER’S CUP CLASSIC could be a special race. I am not ready to sell this group of 3-year-olds short yet, and look for an upset or two to happen as we near Halloween in Lexington.